The third edition of the Capital City Cross Country Challenge showcased two elite individual talents as well as some strong teams hoping to be back at Oak Hills Golf Center in five weeks in position for team trophies at the State Cross Country Championships. The meet also saw two of the best small school female runners in the state sit out with injuries, leaving fans only guessing who might have won a great duel. It was a beautiful day in Mid-Missouri as cooler temperatures ruled the second week of autumn, making for excellent racing conditions on the well-groomed turf of the Oak Hills course. 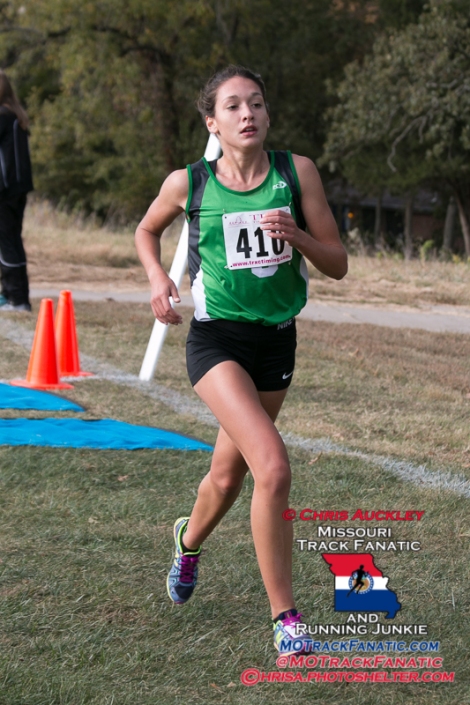 Ste. Genevieve senior Taylor Werner won the Class 3-4 race easily, but the blustery wind conditions kept her from the chance to match her 2013 meet time of 17:25. Werner finished in a still impressive 17:40. For the second week in a row fellow Ste. Gen. senior Mia Jerman was next across the finish line. Mia (pronounced My-Uh), finished the 5k in 18:15. Platte Country sophomore Rebekah Geddes impressed with a third-place finish in 18:46 while Marquette All-Stater Hannah Pierson was fourth in 19:09. 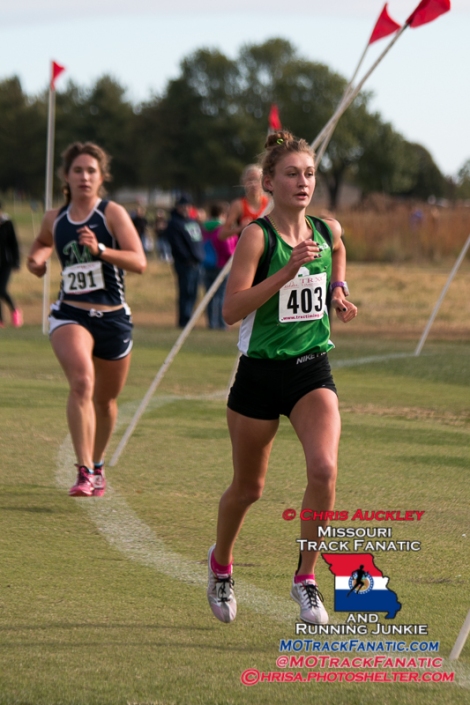 Ste. Genevieve was running without one of their four senior All-Staters in Mallory Koller who sat out, but it didn’t keep the team from their second Capital City Cross Country Challenge title in three years. Senior All-Stater Amy Huck was 14th while freshman Sarah Moore was 16th. The Lady Hunters couldn’t match their 64 point score from 2013 but settled for 87 points for a comfortable win. Coach Jim Cary’s Lindbergh girls took second with 146 points and were led by freshman Jennifer Weaver who took 5th in 19:18.

Several teams wore uniforms with the color pink in them, presumably in honor of breast cancer awareness month. One team that added pink to their full-time uniforms years ago was Liberty. The Lady Blue Jays finished third in the race with 161 points to edge Lee’s Summit North-165, and Helias Catholic-170. Marquette-180, rounded out the top six. Twenty-two teams competed in the race. 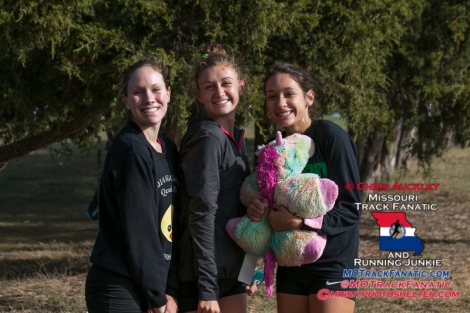 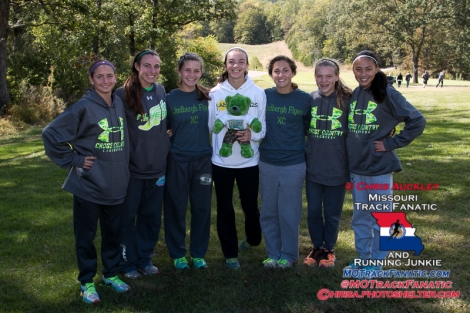 In the Class 3-4 Varsity Boys race, Ste. Genevieve junior Ben Naeger was out to better his 2014 State meet time of 15:32, where he finished second to Festus’ Michael Karl’s in Class 3, and even go under 15:30. Naeger pushed himself up and down Oak Hills’ hills, but with the strong winds and him not feeling as well as desired during the race kept Naeger’s time to a still phenomenal time of 15:41. 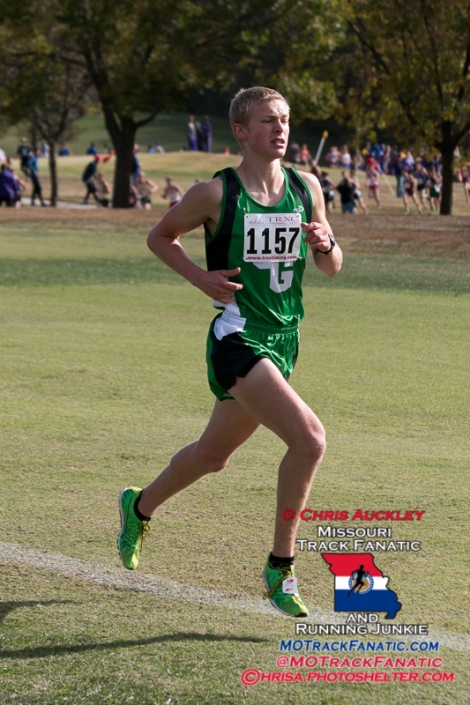 Parkway South senior All-Stater Nicholas Matteucci took second in 16:13 while Rockhurst’s John Luder won a three-man sprint to the finish in 16:22.85, leaving Farmington’s Ryan Parson to settle for fourth in 16:22.94, and Timberland’s Austin Crowe to settle for fifth in 16:25. Helias’ Elliott Knerschield and Westminster’s John Murray were the top Class 3 finishers, with Knerschield taking seventh and Murray taking ninth. 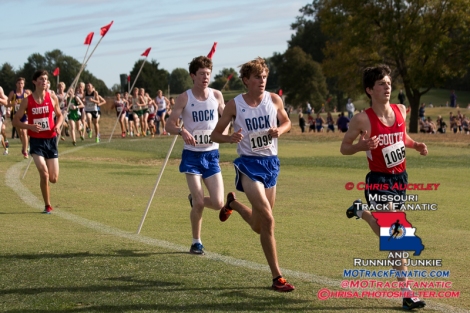 Michael Dierks’ Rockhurst Hawklets squad put three in the top-15 to secure the overall team title with 83 points. Tim Nixon’s Liberty Blue Jays weren’t far behind in second with 109 points. Marquette was third while Parkway South edged Lee’s Summit North by one point for fourth, 170-171. DeSmet was sixth with 175 and Ste. Genevieve was the top Class 3 finisher totaling 201 points. Twenty-seven teams competed in the race. 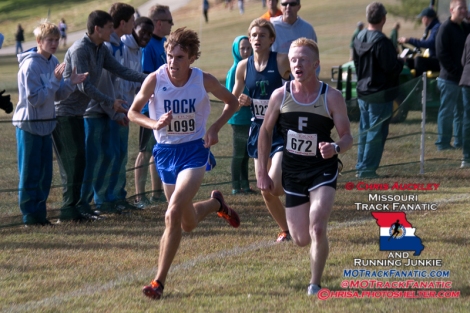 Injuries keep Massman and Workman out of Class 1-2 Race

It appeared three of the best Class 1 and Class 2 runners in the state were going to be on hand to do battle over the rolling hills at Oak Hills. However Fatima’s Anna Massman and Summit Preparatory Academy’s Claire Workman were on hand, but stayed on the sidelines. Injuries kept the pair out. Massman was dealing with a ankle injury while Workman a foot injury. Neither one seemed concerned that the injuries would keep them out very long. That left the race all to the third small school super standout, Fatima’s Brianna Haller, the 2014 Class 2 State Champion. 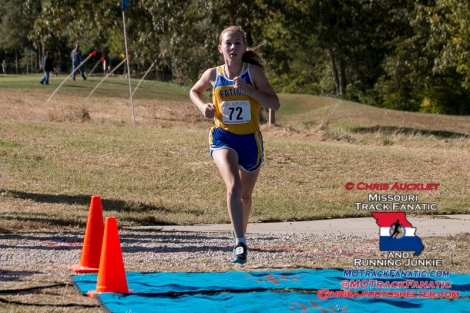 Haller cruised around Oak Hills, clocking a 19:01 time, 34 seconds faster than her 2014 State Meet time. Last week the Fatima Lady Comets had a 1-4 finish at Hancock, so with Massman out they settled for a 1-3 finish as they cruised to another easy team victory. Fatima freshman Alyssa Struemph and Katelyn Vanderfeltz finished second and third in 20:14 and 20:16 as Fatima put four in the top 10 while their fifth runner was 24th, giving the Comets 36 points.

Father Tolton Catholic from Columbia, Mo. was second. Tolton was led by Rachel Selva and Davis Atkins who took seventh and ninth as the team totaled 76 points. Alex Curtin finished fourth in 20:32, leading Whitfield to a third-place finish with 100 points. Springfield Catholic scored 125 for fourth while Crystal City was fifth with 141 points. Lawson was sixth with 152 and Summit Preparatory Academy seventh with 173 as 12 schools fielded scoring teams. Crystal City edged Summit Preparatory Academy in the Class 1 division standings. 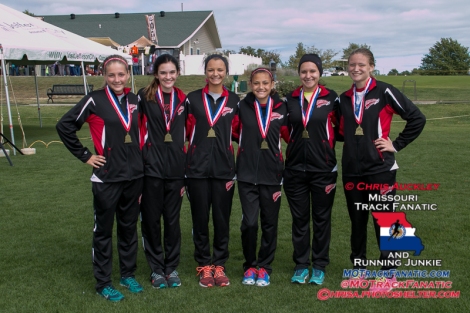 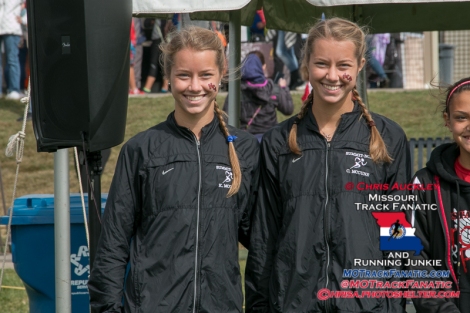 One of the most decorated small school runners in recent years came away with the victory in the class 1-2 Varsity Boys race Saturday. Liberty (Mountain View) senior Daylan Quinn pulled away from Springfield Catholic sophomore Stephen Kielhofner over the last mile to take the win and finish in 16:23. It was Quinn, Kielhofner, and Whitfield’s Simon Gelber together at the front at the first mile-marker. At two-miles it was Quinn and Kielhofner together, but over the last mile, the long-haired Quinn pulled away for the victory. Kielhofner finished in 16:30 while Gelber held on for third in 16:50. 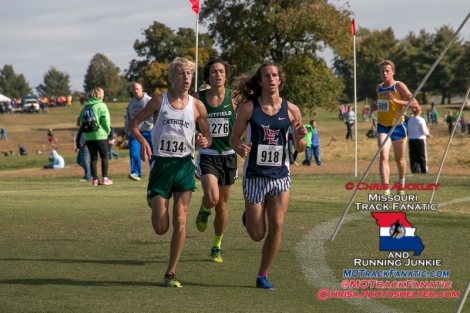 The team race featured three of the four Class 2 State Trophy teams from 2014 and the top ten results had a lot to do with Saturday’s team results. Fatima’s Hunter Hennier was fourth in 17:00, Springfield Catholic’s Austin Reith fifth in 17:09, Whitfield’s Morgan Leake sixth in 17:15, Springfield Catholic’s Lachlan Moore seventh in 17:16 and Fatima’s Alex Krieg eighth in 17:27. In the end it was Springfield Catholic putting five in the top 15 to take the team title with just 35 points. Fatima was second, ten points back with 45. Defending Class 2 Champions Whitfield was third with 99 points. Look for those three to be back in trophy contention at this year’s state meet. Linn was fourth with 136 points while Russellville and Blair Oaks made it four Mid-Missouri teams to finish in the top six, with their fifth and sixth-place finishes. 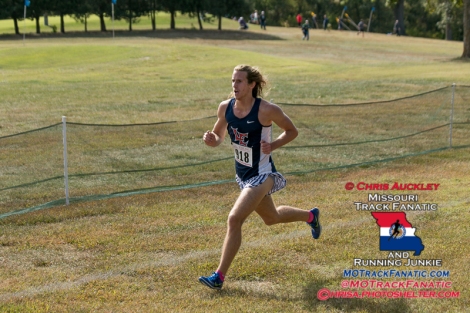 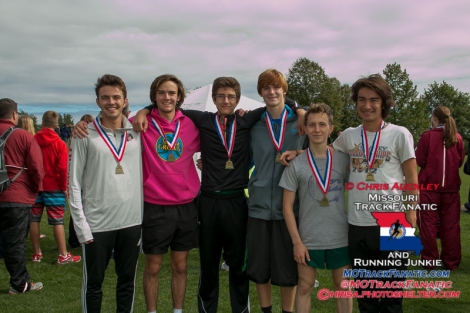 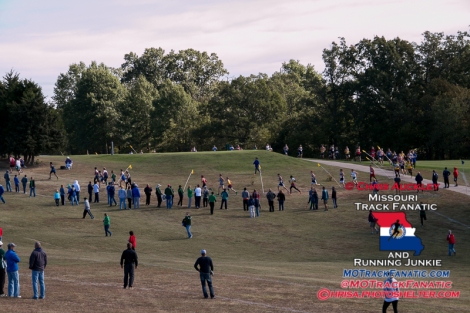 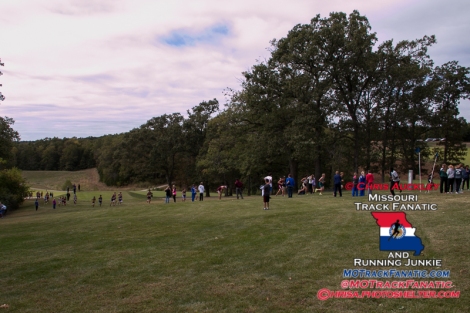 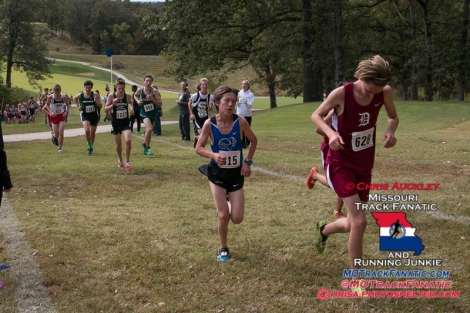