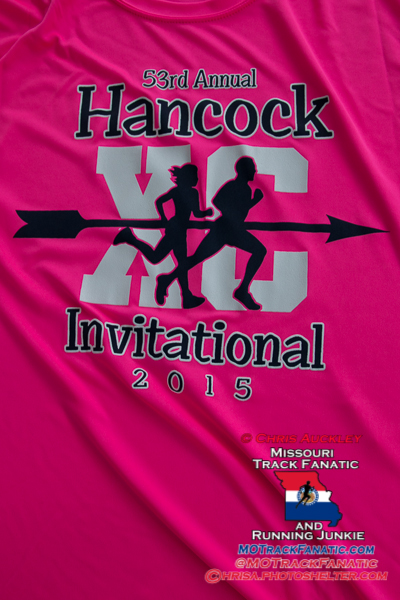 For the second time in three years the Class 3 Ste. Genevieve girls ran up a division in the 4A race and Taylor Werner showed she is back 100 % healthy after the All-American’s frustrating, mysterious injury plagued junior year. Werner showed she was back to her 213-2014 form and blasted out of the gates Saturday morning at 8:00 a.m. and at 400 meters Lafayette’s superstar Anna West was nearly sprinting to try to keep Werner in sight.

Werner went on to victory in  17:42.70, nearly a half-second faster than her victorious time of 17:43.19 in 2013 on the Jefferson Barracks course that was slightly adjusted in 2012 according to the maps that were handed out Saturday. In 2013 Werner’s performance led Ste. Genevieve to victory in the 4A race over Eureka and a Anna West-less Lafayette, but Saturday belonged all to the Lafayette girls who dominated with five in the top nine and six in the top 13.

Anna West was second behind Werner in an impressive 18:01, while Ste. Gen. senior Mia Jerman was third in 18:25. Lafayette’s number two Sarah Nicholson was fourth in 18:53 and followed by teammates Grace Breiten and Mollie Rogan while Julia Romero completed the Lady Lancers scoring with her ninth-place finish. Lafayette totaled just 26 points while Ste. Genevieve was second with 52, West Plains third with 75, and Parkway West edged Jefferson City for fourth, 118-126, in the 13 full-team field. The Nerinx Hall girls were on hand, but raced just one runner while the rest of the team ran a workout at the park, in preparation for next week’s Greater Louisville Classic.

Werner said it feels great to be back healthy and that it was a real struggle last year with what ended up being a stress-reaction in her pelvis, or a stress-fraction that was healing by the time it was found.

4A Boys: Haines wins while Festus wins despite off-day

The 4A boys followed the 4A girls and a familiar face quickly moved to the front and went on to control and win the race. Lafayette’s Alec Haines was one of three of the Lancers top seven to race Saturday as the others got rest in preparation for next week’s Chili Pepper Festival in Arkansas. It was Haines and Hillsboro’s Aaron Dugan that did battle early at the lead. Haines started to break away after the mile though and went on to win in 15:53. It was the fastest time by two seconds for anyone on the course since it’s marginal change in 2012. Dugan held on for second in 16:08, while Parkway Central’s Charles McIntryre was third in 16:18. 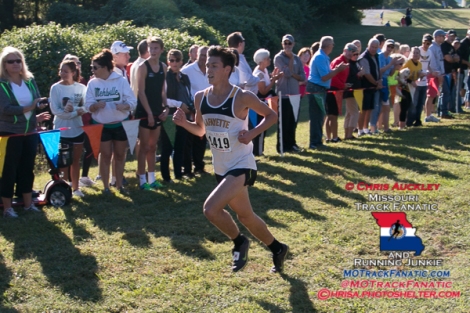 For the third straight year the Class 3 Festus boys moved up a division to run the 4A race and for the second consecutive year they were victorious. The team did so on an off day as Coach Bryant Wright said they were flat and that’s probably to be expected after a tough week of workouts before next week’s Chili Pepper meet. This year’s team lacks the superstars like Drew White, Michael Karls, or Tyler Gillam, but have plenty of horses to get the job done. Despite the off day, the Tigers put five in the top 17 and scored 54 points. 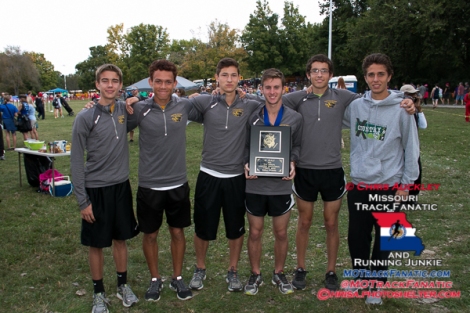 Two weeks after winning the freshman race at the Forest Park Cross Country Festival, Festus’ Maxwell McDaniel was 10th in the race and looks like he’ll be Wright’s first freshman All-Stater in cross country. Hunter Darnell and Brendan Pratt led the Tigers with their 6-7 finishes. Festus’ 54 points were 31 better than West Plains 85 points while the partial-A squad for Lafayette was third with 124. Lafayette’s normal fifth-man Tommy Laarman had a good showing in ninth in 16:50. Hillsboro beat out Timberland for fourth, while sixth-placed Jefferson City scratched their top two boys Jackson Schwartz and Saxon Teubner, for injury preventive reasons for Brett Phillips team. Without the scratches the Jays would have been in title contention in the race. Twenty-two teams fielded scoring teams in the race. 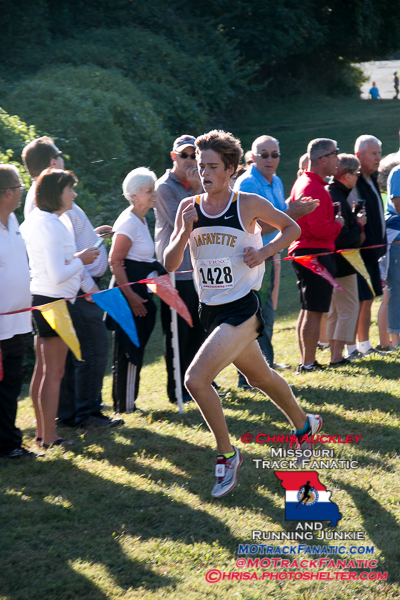 While the Lafayette girls scored just 26 points, it was the two-time defending Class 2 State Champions Fatima girls who had the lowest score of the day as the Comets totaled just 22 points in the 1A-2A girls race. Fatima went 1-4 and their fifth and sixth were 14th and 16th. Fatima was led by an impressive 1-2 finish by junior Anna Massman and sophomore Brianna Haller  who posted times of 19:17 and 19:27. Haller was the state champion as a freshmann last year and their pair get along and push and motivate each other and Haller has no complaints about loser to her teammate after winning state last year. Though the field was not big with just eight scoring teams and 73 runners, this performance seems to make Coach Marcus Bridges team the favorites for another Class 2 state title.

Led by State Track champion Rachel Selva who was seventh, Father Tolton Catholic was second with 76 points. The Whitfield girls were third with 87, while Lutheran St. Charles was fourth with 106. 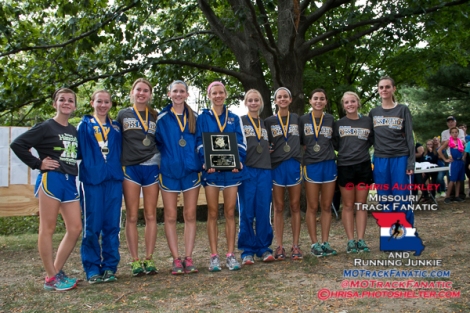 3A Girls: Lee’s win leads MICDS to title over Helias

With Ste. Genevieve in the 4A race and MICDS and Helias in the 3A race, three trophy teams from last year’s Class 3 state race were on hand Saturday in St. Louis County. In the 3A race it was MICDS senior Geneva Lee, who’s a 400/800-meter specialist on the track, that was victorious and led her Lady Rams to the team victory over Helias Catholic. Lee moved to the lead in the first 800-meters and never looked back. Lee finished in 19:44 for a 19-second win over Lutheran South’s Riley Schelp. Coach Jim Lohr’s MICDS squad put five in the top 20 to total 54 points while Mary Haskamp’s Helias team was led by Kayla Yanskey’s sixth-place finish and put six in the top-25 to total 72 points. Festus was third with 119 St. Francis Borgia edged John Burroughs for fourth, 129-133. Sixteen teams fielded scoring teams. 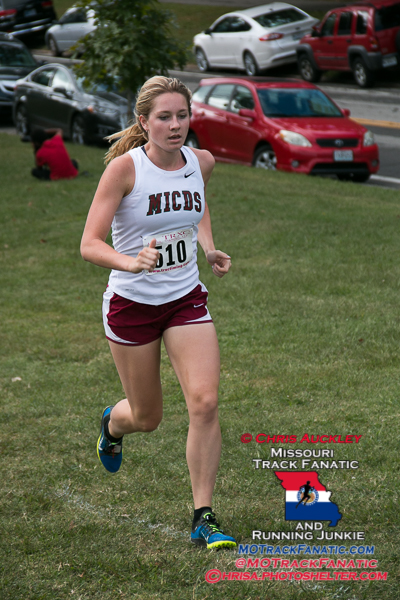 Whitfield (St. Louis) junior Simon Gelber kept the Boys 1A-2A race title in the family. A year after his brother Nate won the race for Whitfield and eventually won the Class 2 title, Simon was in control most of the way and won in 17:00. Whitfield is the defending Class 2 Boys champions and not only got a first-place finish from Gelber, but got a second-place finish from fellow junior Morgan Leake in 17:24. Fatima seniors Hunter Hennier and Cody Huhn led the way for the Comets as they overcame Whitfield’s 1-2 individual finish. Fatima put four in the top nine and had a fifth in 20th to take the title with a score double their girl’s squad, 44. Whitfield was second with 60 while Russellville took the final team trophy with 88 points. Red Bud (Il.) was fourth, edging Jefferson High School (Festus), 147-154. The race featured 16 scoring teams. 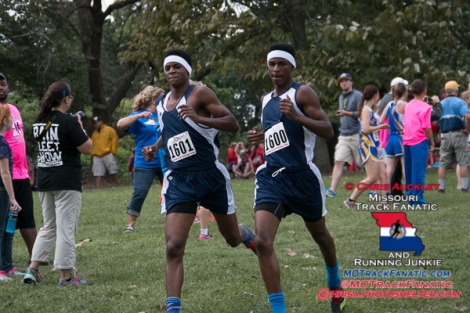 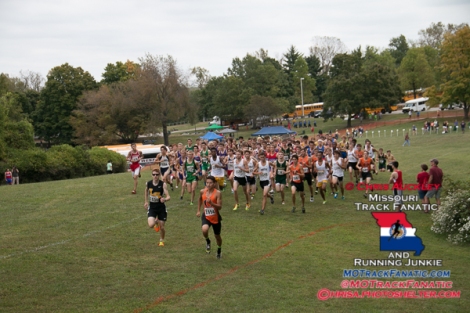 In the final varsity race of the day, Ste. Genevieve junior Ben Naeger continued his strong season two weeks after his Green Division victory at Forest Park. Naeger blazed the course and bettered Alec Haines new course record of 15:53 with a 15:32 clocking. The impressive time on a somewhat hilly course puts Naeger in contention as one of the top runners in the Midwest and shows he’s ready for a state title and some postseason success. Naeger’s effort not only gave him the individual victory, but it lead to the first meet team title for the Ste. Genevieve boys squad in ten years, according to the team. Schuyler Ogden made it a 1-2 finish for Ste. Genevieve with  his 16:46 runner-up finish. Ste. Gen totaled 42 points to beat out Festus’ B squad while the Priory Rebels took third for the final trophy. Matt Candrl’s Owensville team was fourth and Helias fifth.

The individual result gives him confidence going forward, said Naeger, as he’ll run the state meet course next weekend at the Capital City Cross Country Challenge. The team victory made it an even sweeter week for head coach Brian Jett, who days earlier found out he had been voted into the Missouri Track and Cross Country Coaches Association Hall of Fame, and will be inducted in December in Columbia. 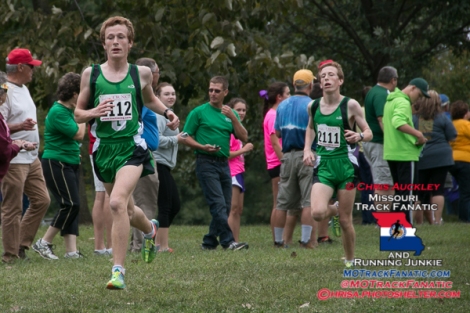