The 2014 MSHSAA Class 4 Sectional 1 moved to Farmington after several straight years at Parkway Central in Chesterfield. The class 4 meet was joined by the class 2 district one meet at Farmington’s Engler Park, as the practice of combining MSHSAA state series meet locations and hosts continued after it began in 2012.

The combined meet was hosted by Farmington High school on a scenic course at Engler Park. The course wound around several small lakes, through a big field or two, along long tree lines, and through a trail in the woods, making it a fun course to run for the many first-timers racing it Saturday.

As usual, sectional 1 featured several of the top teams in the state while the individual talent was abundant. The top six finishers in the girls race have excellent chances for top-10 finishes at the state meet, and many more in Saturday’s race will be in the mix for top-25 finishes and All-State honors. The boys race featured several All-Staters from 2013, and it’s possible you’ll see 10 Sectional 1 boys in the top 30-40 at state.

The Lafayete Lancer Boys and Girls cross country teams entered the MSHSAA Class 4 Sectional 1 meet as two of the top teams in the state and with nearly perfect records. The boys had seven meet titles entering Saturday and an unblemished record when they’ve run all of their best talent. Their 5th-place finish at the Forest Park cross country festival occurred without sophomore standout Austin Hindman, who was reportedly taking the ACT. With Hindman running in the race and his likely top-15 finish means Lafayette would have had a tight battle with Festus for the victory.

The Lafayette Lady Lancers only loss with all of their top girls came at the Forest Park meet. The ladies were 17 points behind Kansas’ strong regional power, St. Thomas Aquinas. The Lancers also finished second at the Hancock invitational, though it came when All-Stater and number one runner Anna West sat out with food poisoning, leaving the Lancers seven points behind West Plains.

The Class 4 Sectional 1 boys race was the first of the day, and it wasn’t long until the Lafayette Lancers were in control. Just before two miles, Lafayette’s Austin Hindman and Dylan Quisenberry came out of the wooded trail together, with teammate Alec Haines a few spots and a few seconds back. The Lancers cruised over the final mile, while other runners fought to move up to help their team scoring and ensure their trip to the state meet with a top-30 finish.

Hindman and Quisenberry came down the homestretch together with Hindman taking the victory a quarter-step ahead of Quisenberry, both finishing in 15:57. Haines had moved past a runner or two over the last mile and made it a 1-2-3 finish for Lafayette, with Haines clocking in at 16:02. Oakville’s Griffin Bailey had an impressive performance, taking fourth two seconds back of Haines. 2013 All-Stater Andrew Osborne of Parkway West seems to becoming around this year after missing most of the track season with injury. Osborne finished fifth, just ahead of host Farmington’s Ryan Parson. 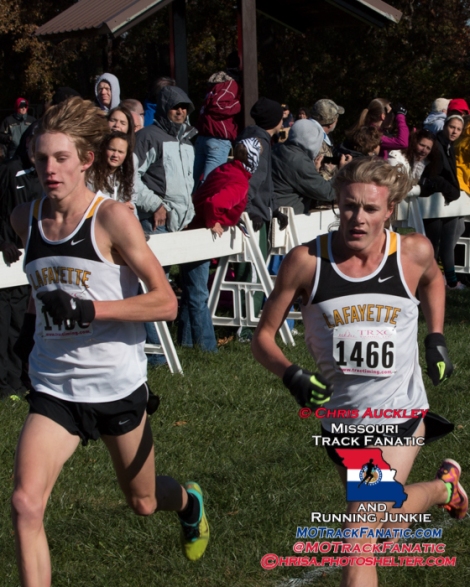 Devin Meyrer took seventh for Lafayette while Jackson’s Jack Jeffers led his team to a state berth with his eighth-place finish, while freshman teammate Ean Buffington was 10th. Evan Wright was ninth for Parkway West, helping the Longhorns to a state meet berth. Hillsboro’s Aaron Dugan faded a bit over the last mile taking 11th, but don’t be shocked if he’s an All-Stater come next Saturday. Marquette senior Kevin Ganahl has looked impressive the last month. The 2013 Class 4 17th-placer, got hurt in track, leaving him to get around on a scooter that supported one of his legs and took pressure off his injured foot most of the spring and summer. Ganahl wound up 12th Saturday, leading the Marquette Mustangs to the state meet, an impressive feat for a school that lost quite possibly the two most talented runners to graduation that last two years in Noah Kauppila and Adam Roderique. 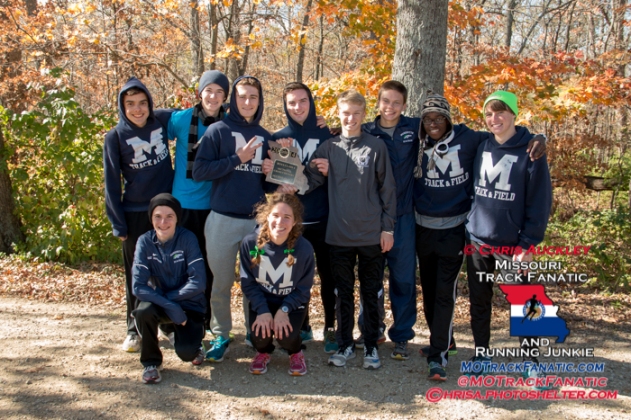 Josiah McElmurry rounded out Lafayette’s scoring with his 17th-place finish. That left the Lancers with  just 23 points for the victory. Marquette managed to put three in the top-21 and totaled 86 points for runner-up honors and the second-place team trophy.  Parkway West ended up third with 95 points, while Jackson totaled 103 points, beating out Hillsboro-126, CBC-128, Lindbergh-135, and Fox-223, to earn state meet berths.

The class 4 girls race featured high school All-American and Eureka senior Hannah Long. Her presence meant everyone else was running for second place, but the battle behind her was a good one. A trail pack quickly emerged behind Long. It included Lafayette’s Anna West and Sarah Nicholson, Maddi Leigh of Francis Howell, Chelsea Drum of Jackson, and Marquette’s Hannah Pierson.

At 1100 meters, West and Drum lead the chase pack, with Nicholson, Leigh, and Pierson trailing right behind. Rockwood Summit’s Melissa Menghini followed the pack 15 meters back while the rest of the field strung out behind her. Just before two-miles, Long was still looking strong. And on the cold but sunny morning, it looked as if her only competition was her shadow. Long had put 54 seconds on the trail pack, which was still tightly bunched. Pierson and Leigh had moved to the front of the pack by then as the race for second-place was to be determined over the last mile. 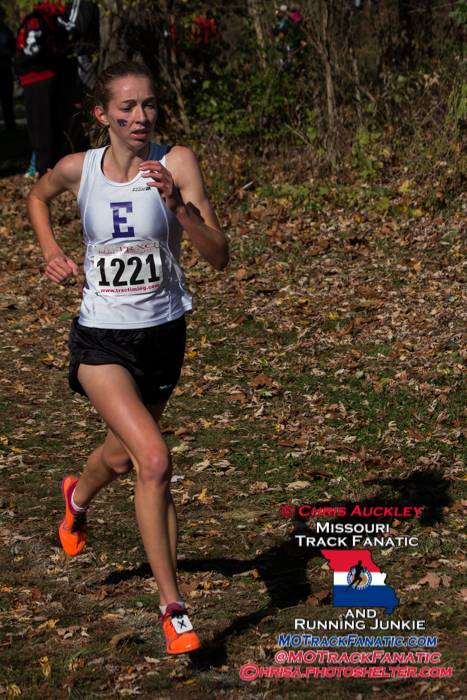 Long put it in cruise control the last mile but at the finish she blasted down the homestretch to lots of cheers coming from amazed fans standing along the 80-meter finish stretch.

Marquette’s Pierson came out of the tree line in second, having pulled ahead of the four others in the chase pack. She ran along one of the lake’s edges before making the left turn to the finish stretch. Pierson powered to the finish, clocking in at 18:06. Lafayette’s West and Nicholson were next out in the open, but Jackson’s Drum changed gears in the final 120 meters and had her eyes set on the pair of Lady Lancers. Drum, the tall and strong junior, was able to chase one target down but ran out of room to catch both. West crossed the tape in 18:10, while Drum finished 3/10th’s of a second back, jut edging Nicholson by 2/10ths. Howell sophomore Maddie Leigh faded a bit over the final mile, ending up 6th in 18:33. Menghini held on to 7th in 18:45. 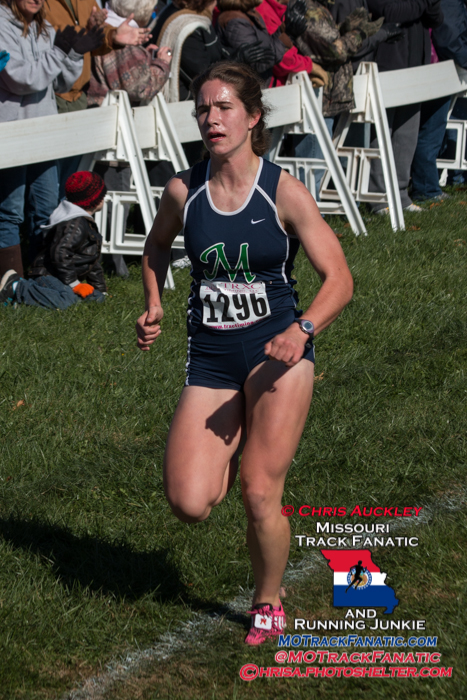 The 3-5 finish of West and Nicholson was followed by teammate Elise Larson’s 9th place finish, while Julia Romero was 15th, and Courtney Trube in 33rd for the Lady Lancers. That totaled 45 points for Lafayette and gave them the team victory. Eureka followed with runner-up honors, led by Long and sophomore Andra Staciu’s 13th-place finish. It was a tight three-team battle for the final two qualifying spots. Parkway WestParkway West put three in the top-19 to secure third place. The Lady Longhorns were led by sophomore Natalie Rath-8th, senior Maddy Brown-11th, and junior Rachel Osborne-19th. West totaled 81 points.

A big roar came from the Parkway West girls tent as coach Cutelli gave the good news that the Lady Longhorns had finished third to qualify for the state meet. The girls screamed and shared hugs and then made a circle where they celebrated with an exploding fist-bump that knocked them to the ground with their feet flying skyward, rolling on their backs, and then back up. Needless to say they were happy to have another week left of the season and to be headed to Jefferson City. 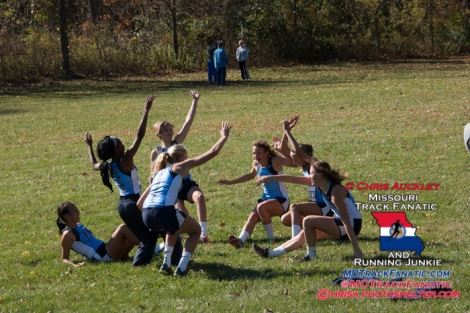 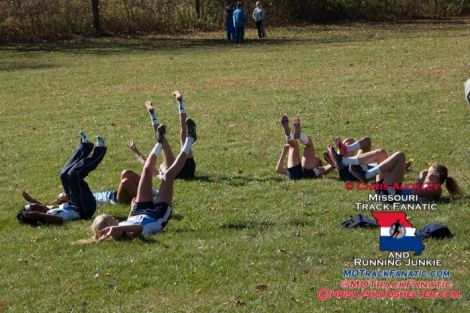 It appeared it Cor Jesu had a bit of an off-day and finished sixth to miss out on a second-straight trip to state. Lindbergh finished 7th while Northwest high school was eighth.

In the Class 2 District 1 boys race, like Lafayette in the Class 4 boys race, Coach Kyle Davis’ Herculaneum squad left little doubt about who would win from early on in the race. It was Herky senior Tristan Mock in command just before two-miles. He was 14-seconds up on a pair of teammates, Josh Ferguson and Loki Cortner at that point. At the finish, fans got to see a lot of the candy-striped red and white shorts of the Herculaneum boys.

Mock cruised down the homestretch comfortably in 16:59, while Ferguson pulled away from Cortner, as the pair finished in 17:10 and 17:12, giving the Blackcats a 1-2-3 finish. Jefferson High School’s (Festus) Colton Kassen kept it from 1-4 sweep by taking fourth in 17:32, with Herky’s Noah Thomas fifth in 17:34, edging Jefferson’s Blasie Torrence by 1/100th of a second. John Maddox capped Herculaneum’s scoring with  his 10th place finish, sealing the team title with just 21 points. 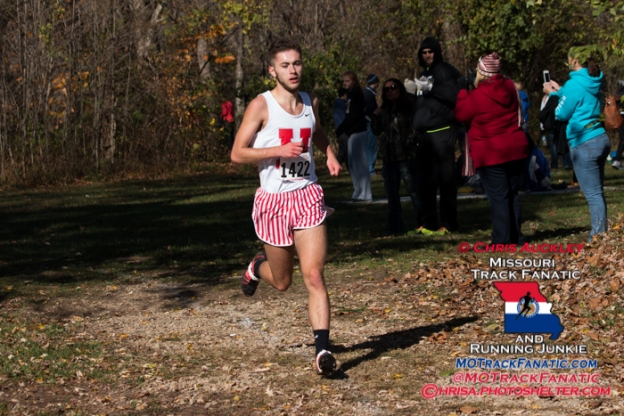 Jefferson captured the second and final state meet qualifying spot with 56 points. Arcadia Valley was third with 73 points, Woodland was fourth with 78, and Scott City totaled 131 points for the fifth-place. 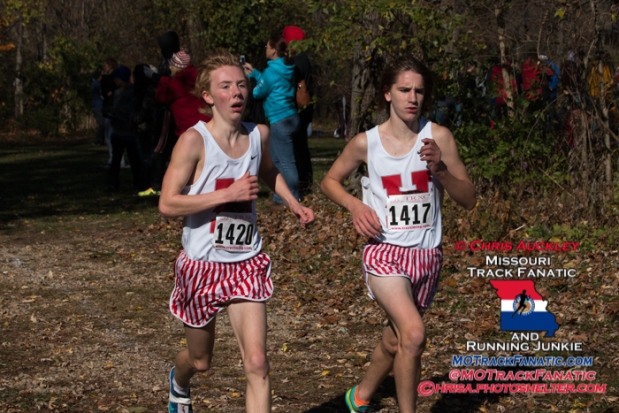 The girls Class 2 District race wasn’t much different than the boys. Sophomore Danielle Prince led Herculaneum’s charge off the starting line, across a field, and up and over a hill. Fifteen seconds in and Prince was leading and would never look back. By the two-mile mark Prince held a 23-second lead over teammate Ana Gil-Diaz. Arcadia Valley’s Anna Thomas was another five-seconds back while Herculaneum’s third runner, Haley Damkroger was four seconds back of her. 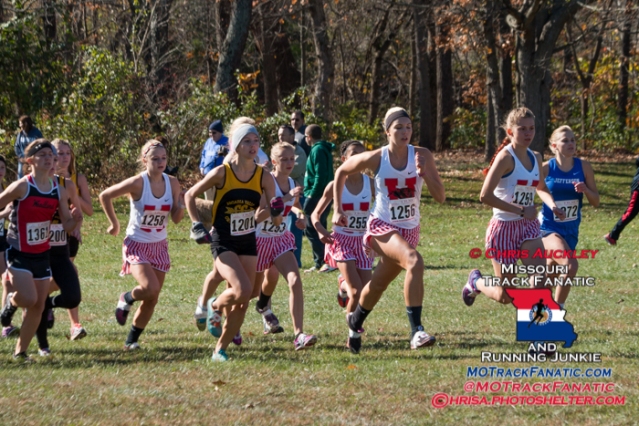 By the end though the Lady Blackcats had improved on the boys finish. Danielle Prince won easily in 20:07 while Gil-Diaz was second in 20:33. Damkroger had moved passed Thomas to finish third in 20:44 to give the Herky girls their 1-2-3 finish. Thomas finished fourth while Herculaneum’s Sam Jarvis (5th) and Keara Pieper (7th) gave Herky a nearly perfect score of 18 points. 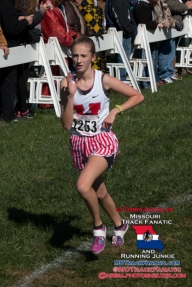 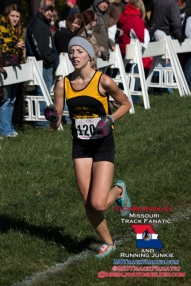 Herculaneum added a 13th and 16th place finishers to further show their dominance.