14 Missourians competing for shot at first-ever World Jr Champs in US, at Jr Nationals

Of the 14 Missouri qualifiers, seven are college freshman while only seven Missouri high schoolers took advantage of the opportunity to compete while quite a few more had qualifying marks. The high schoolers consist of one sophomore, three juniors, and three seniors.

Two athletes enter the meet with top seeds. That includes Southern Boone County HS senior and Computomarx Track Club’s Landon Bartel, who tied the Missouri Class 3 State Meet Record with a 7-foot clearance in the high jump, and has a 7-1 seed mark. The Ashland native and University of Nebraska signee placed second at last year’s World Youth Trials in Edwardsville, IL, a meet for 16 and 17-year olds.

Blue Springs junior Carlos Davis and his stunning 212-5 state meet all-class record puts him atop the discus entries, while brother Khalil and his 198-5 mark puts him fourth. Despite those efforts, the pair will have to adjust to the international junior implement, which differs from the American high school version. 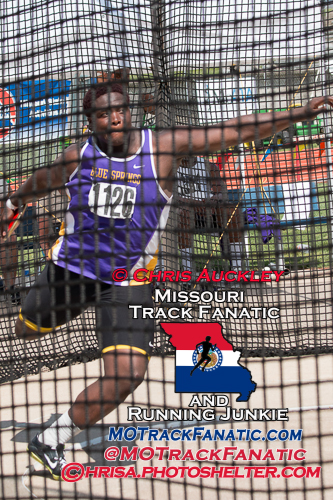 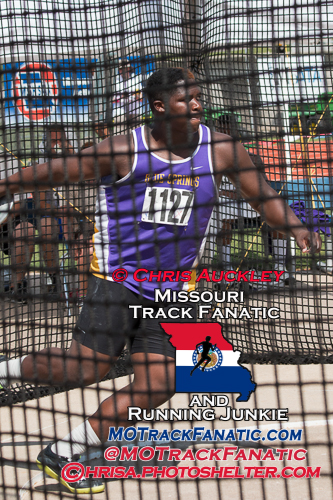 Central Methodist University’s Doug Hutcherson, a Clinton high school graduate, will compete in the 10k race walk. Hutcherson has a 24:20 5k qualifying mark, but he’ll have to race much faster pace than that to be competitive and reach the 44:20 World Champs qualifying mark. Hutcherson placed third at the NAIA Outdoor Championships in May in the 5k Race Walk for CMU. Central Methodist has produced another distance runner who turned into one of the top race-walkers in the country. Patrick Stroupe graduated a handful of years ago after winning multiple NAIA race-walk titles, earned another U.S. medal with his second place performance in the 20k Race Walk at last week’s U.S.A. championships.

The St. Louis area is home to the two athletes competing in multiple events. Michael Wells, the many-time Missouri Class 2 state champion sprinter for Cleveland NJROTC, will run in the 100 and 200-meters where he is seeded 12th and 14th. The future Oklahoma Sooner’s best chance will be 100, where he is one of the top Missourians of all-time. The other two-eventer is another class 2 star, Brentwood sophomore Sophia Rivera. Rivera will compete in the 4-kilogram shot put and the javelin, where she is seeded 14th in both. Rivera is now four for four at the State Meet, undefeated in the shot put and discus. Since the state meet, Rivera has competed in numerous events, including the Great Southwest Track Classic in Albuquerque, NM, where she won the discus.

After running one of the fastest 200-meters ever for a Missouri girl, 23.86 at elevation at the Great Southwest Track Classic, Lydia Harold, a McCluer High School junior, will compete for the St. Louis Lightning Track Club as the 10th seed in Eugene. 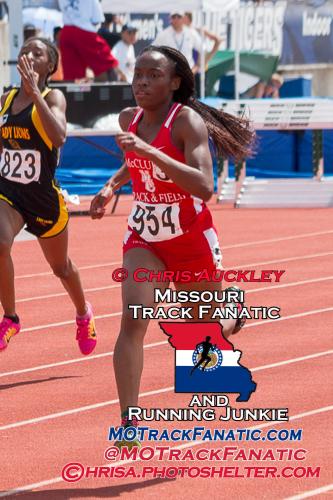 Cardinal Ritter senior and St. Louis Express Track Club’s Charles Jones, one of all-time best long sprinters in Missouri prep history will run his specialty, the 800-meters. Jones, the Texas Tech signee has a season’s best of 1:50.19, which puts him 10th on the entry list. However, you can throw entry times out the window when Jones gets into a fast race with good competition. 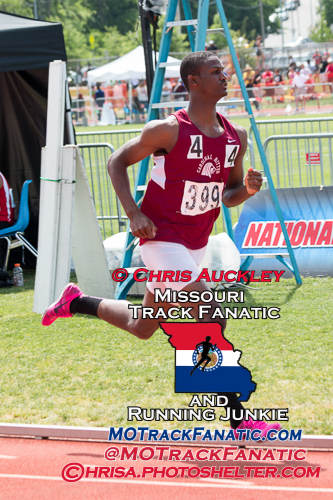 The distance races feature three freshman collegiate men, all from Coach James Butler’s UMKC distance squad. Nathan Keown, a standout at Rock Bridge high school, is the 14th seed in the 5k with his 14:39. Teammate James Barnett, a former Blue Springs high school All-Stater, is the 17th seed with his 14:51. The pair will have to run big personal records if they want to meet the 14:15 World Junior Champs qualifying standard. Also, Bryce Miller, a freshman from Ashland, Wisconsin, is the number three-seed in the steeplechase with a 9:01, a fantastic time for a freshman, already under the 9:10 World Jr’s standard.

Two other collegians will square off against each other in the women’s long jump. Nataliyah Friar was a standout sprinter and horizontal jumper at Wentzville’s Holt High School. Friar will look to extend her freshman year at LSU by qualifying for the World meet in the long jump. Friar missed an All-American top-8 trophy at the NCAA Division I Indoor Championships in the long jump by slimmest of margins. Friar had a best jump of 20-1.75, matching another athlete for eighth, but on the tiebreaker, the second best jump, Friar was 3-centimeters back.

At the outdoor meet Friar finished 13th in the long jump, while anchoring the LSU 4×1 squad to the finals, where unfortunately they couldn’t get the baton around the track successfully, meaning Friar has to wait for another chance to get a trophy. Friar is the eighth-seed with a 20-5.75 and will try to improve upon a seventh-place at last year’s meet. She will face off with Jazmin McCoy. McCoy, a Nebraska freshman, captured the 2012 Missouri Class 4 long jump title for North Kansas City high school, and the 2013 title for Blue Springs high school. McCoy should be comfortable on the Hayward Field runway. Three weeks ago McCoy surprised some with a sixth-place finish at her first NCAA Meet, where she jumped 20-8.5. She is seeded ninth, but with an old mark and doesn’t include her NCAA mark, which puts her in a tie for third with two other entrants.

Shaelyn Grant is the lone Missouri hurdler entered. The 2013 McCluer High School grad who spent her freshman year at Texas Tech but is transferring to Northern Illinois, will compete for the St. Louis Lightning Track Club. Grant will try to improve on a 21st place finish at last year’s meet, though was on pace to finish much better until hitting a hurdle late in the preliminary race. Grant is seeded 14th with a 58.91.

The 14 Missouri athletes will look to join previous Missouri athletes to qualify and compete at the World Junior Championships like Emily Sisson, who set the now bettered U.S. High School 5k record of 15:48 in the meet in 2010 in Canada. In 2012 a pair of Missourians made the USA team. Deanna Price, a Southern Illinois University freshman and All-Stater from Moscow Mills, MO, and Troy High School, competed in the hammer throw. Courtney Frerichs, a UMKC freshman and Nixa High School standout competed in the steeplechase.  In 2008, Villa Duchesne’s Cydney Ross won the 800-meters at the U.S. junior meet, but did not have a passport and missed a trip to Worlds; a necessity not needed this year. Shannon Leinert ran the 800-meters at the 2006 World juniors meet. The Eureka High School and Mizzou grad just finished ninth in the 800-meters at last weeks’ USA Outdoor Track and Field Championships.

The meet runs Saturday and Sunday and will be webcast on USATF.tv. The 2014 IAAF World Junior Championships will be held July 22-27 at Hayward Field, in Eugene, Oregon. More info on this weekend’s meet can be found here: http://www.usatf.org/Events—Calendar/2014/USATF-Junior-Outdoor-Championships.aspx

While info on the world junior meet can be found here: http://oregon14.com/#&panel1-1 and here: http://www.iaaf.org/competitions/iaaf-world-junior-championships