After getting pushed
back two days because of weather, the (St. Louis) Suburban West Conference
Cross Country Championships was held October 8, in Chesterfield as Lafayette
High School hosted the meet at the cross country course at Parkway Central
High. It was the first of three meets in the coming weeks for many of the
runners on the course. The site will play host to the Class 4 District 2 meet
and the Class 4 Sectional #1 on October 20, and October 27.
In the Varsity Boys
race, the Marquette duo of Noah Kauppila and Adam Roderique earned their third
straight 1-2 finish. After Rodgerique kicked passed Kauppila for a 1-2 Mustang
finish at the Rim Rock XC Classic September 22, Kauppila captured the Parkway
West title September 29 with Rodgerique not far behind. Monday, the junior Kauppila,
earned his second straight conference title rolling to victory just under 16
minutes, clocking in at 15:59. Senior Rodgerique, improved eight spots from
last year’s meet finishing in 16:12. Parkway South senior Brian Hernan continued
a strong season with his bronze medal finish in 16:21.
Despite missing their
number four runner, Derek Albright who was attending his grandmother’s funeral,
the Lafayette Boys easily captured the conference title, the Lancers first
since 2007. The Lancers went 4-5-6, with seniors Derek Legenzoff finishing 4th
in 16:29 and Jordan West 5th in 16:46, while freshman Dylan Quisenberry clocked
in at 17:02 for 6th. With their other three runners finishing 20th,
21st, and 26th in the 59-athlete field, Lafayette totaled
56 points to comfortably take the crown over Lindbergh, 74 points, and
Marquette, 78 points.
Legenzoff said about
winning the conference title, “That was definitely a huge goal of ours all
season long, and we’re just happy to be able to pull it out today.” With
arguably the two top boys in the state in the race in Kauppila and Rodgerique, it
would be tough to place first or second but Jordan West welcomed the chance to
race them. “They are great pacers so we just followed them. They took it out at
5:12 today (for the first mile), so we were like, ‘yeah we’ll go with you guys,
that’s awesome’. They led us out perfectly and that was our game plan” West
said.
Winning the conference title
without their fourth man may prove to have positive effects going forward for
the Lancers. ”The fact we could win conference without him is just a huge
confidence booster for us,” West added.
After his third place
finish, Parkway South senior Brian Hernan showed respect for the Marquette
standout duo and talked about how his race plan worked out successfully. Hernan
said, “…Adam and Noah, they’re two great runners and I knew that they were
going to be going for 1-2. I knew there was Derek Legenzoff and Jordan West
from Lafayette. I knew it was probably going to be us five. I figured Noah and
Adam would probably (finish 1st and 2nd) and so I’d just
be fighting off Derek at the end, and it ended up working out.”
On the girls side
Eureka was the likely favorite with Lafayette and Marquette expected to give
them a battle. All three teams are built differently and have excelled this
season in different ways. Eureka has shined with a strong 1-2 punch with super-
sophomore Hannah Long and senior Angie Sumner, along with a solid top four with
Megan Cunningham and Rachel Yergensen.
Lafayette had a great pack last year with a phenomenal 1-5 split most
races and finished 6th at the Class 4 State Meet. This year the Lady
Lancers may have the front-runner they need to earn a State Trophy. Freshman
Sarah Nicholson has several top finishes this season including a runner-up
finish, less than 4/10ths of a second behind the winner in the 4A race at the
Hancock Invitational. The Marquette girls have excelled with an abundance of
freshman talent this year. While Marquette lacks a standout front-runner, their
pack style running, which includes four freshmen, excel at moving through the
field and finishing strong.
Eureka’s chances were less favorable on race day
as they were without their number two runner and one of the state’s best in
Angie Sumner. The Lady Wildcats, wearing pink shorts, presumably in recognition
of Breast Cancer Awareness Month, were off the line quick at the sound of the starting
gun.
At 150 meters, Eureka
had five in the top eight, while Marquette was happy to take it easy and had
just about all seven in the bottom half of the 45-woman race.  At the mile mark, after a long climb up a
hill, Long lead Nicholson by eight seconds with Eureka’s Cunningham 12 seconds
back and Yergensen 18 seconds back. Oakville’s Melissa Brown followed closely
behind. Lafayette had five in the top eleven at the mile with Marquette’s 2-5
behind in 14th-17th.
Hannah Long, noticeably
taller and stronger than during her phenomenal freshman season a year ago, was
relaxed and strolled through the wooded trail and the windy turns of the
course. Long expanded her lead on Nicholson to 22 seconds just before the two
mile mark. The team race tightened as Eureka remained 1-3-4 and Marquette’s two
and three runners were just two steps behind Lafayette’s 2nd and 3rd.

In the end, Marquette
was strongest over the last mile with freshman leading the way, putting four in
the top 11. Hannah Pierson was 5th in 19:38 while Eryn Bass was 7th,
Daninelle Morhman 8th, and Lindsay Bass 11th in 20:37.
Senior Ashley Bertich rounded out the top five with a 17th place
finish as the Mustangs totaled 43 points to squeak out a victory over Lafayette’s
46 and Eureka’s 48 point total. The Marquette Girls said winning may have been
in the back of their mind but it wasn’t the main goal, which was to follow
coaches’ orders. According to Shelby Hummel those were to: “…push passed
anybody we could get passed, and just try and run our best and see what would
happen. (And) at least try and get some of our girls some medals. And we did
that, so I’m really proud of our team today.”
Freshman Erin Bass
added, “I don’t think we really realized we were in the running for first,
while we were going. But we definitely had a chance and we made it happen.” The
girls said the Marquette coaching staff didn’t let the ladies know how exactly
things were shaping up during the race, but were simply encouraging and
supportive. “That got us through the race” added Ashley Bertich.
When questioned about
the quick success and impact they have had as a freshman group, Hannah Pierson said
it was in large part due to the support of the team and family-like setting.
With some of the freshman being fairly new to running, Lindsay Bass said the
experience has “been really good.” And it’s one the Lady Mustangs want to
continue for another month.
Do they have goals for
upcoming Districts and beyond? Shelby Hummel said “Big picture, overall, we
would love to be at State, and be in that top 4 teams from sectionals that goes
to state, but we’re just taking it one step at a time and focusing on little
goals before we get to the big picture.”
Hannah Long captured
her second straight Suburban West title, finishing in 18:08 while Lafayette’s Sarah
Nicholson was second in 19:01. Megan Cunningham held form for 3rd for
Eureka in 19:26, while Oakville’s Melissa Brown was 4th in 19:37 and
Eureka’s Rachel Yergensen finished 6th in 19:51.
Nine days after her
runner-up finish at the Great American Cross Country Festival’s Race of
Champions in North Carolina, Long took a little more relaxed approach Monday. “I
was just supposed to run a nice smooth, easy race; I didn’t have a time goal in
mind or anything. So (I was) just getting to know the course better for
districts and sectionals” Long said. About the course where she’ll run for the
third and fourth times this season for Districts and most likely Sectionals,
Long added, “It’s definitely a fun course, you go all over the place with different
terrain … and I’ve run it a lot of times and have to run it two more times.”
In Junior Varsity
action, despite Lafayette sophomore Josiah McElmurry’s victory in 17:43, the
Lancers fell two points short of winner Marquette, 40-42.  On the girl’s side, the combined JV and Freshman/Sophomore
race was run together but separated in scoring. Lafayette dominated, scoring 24
points in the 98-runner, 6-full team JV race with Lafayette junior Katherine
Kelly winning in 21:00. The Lady Lancers scored just 18 points in the
56-athlete freshman/sophomore field to win the four full team race. Lafayette
sophomore Emma Enright was victorious and the first of four Lancers across the
line first, finishing in 21:24. It was a two-title day in the Kauppila
household. After Marquette junior Noah captured the Varsity Boys race in the
first race of the meet, Marquette freshman Jacob won the freshman race in 18:
16 in the day’s final race. 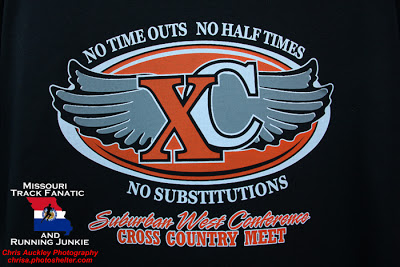 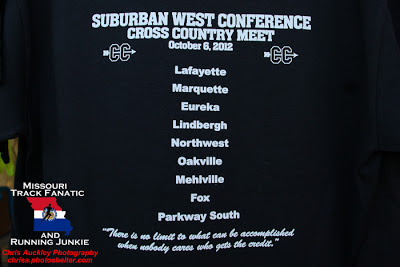